Well, I was going to write about Green. Green is my favourite. But... 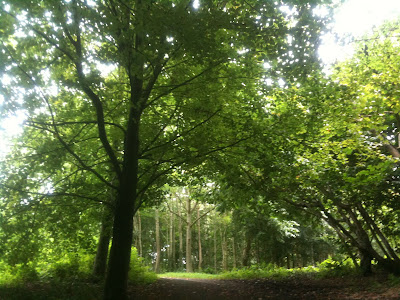 The other day I got lost in my local wood, an astonishing acheivement as I knew I was near the car park, but er, where is it..?  So next day I deliberately followed the same route to become more familiar with the place that I thought I knew already. They do say that getting lost is the best way to learn... (but maybe not half an hour before your class starts...?! I made it on time, phew!)

The air has changed a little, the sun is a bit lower in the sky and has taken on the suggestion of Autumn. (don't panic, it's just the Suggestion..) I know that some people don't like Autumn, and I can understand that to a degree. But its a long slow season, a foot in both camps, with so much going for it, so much colour, that I've begun to view it more like natures big Flush, fully bountiful, the climax of giving the fruits of its labour, rather than the beginning of an end. Look what I'm GIVING you before I have a  winter-rest so that I can start again...  So I was relishing the greenness, the not-autumn look of the wood, when oops, there's some fabulous RED. 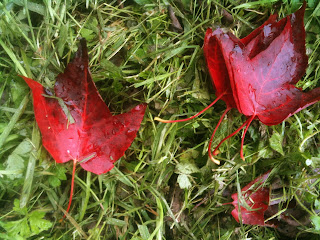 There was no Light, too early in the morning, it was overcast and the camera (which lies) wasn't picking up the vibrancy of the colour in the way that my eye did - after all, there were just a few red leaves on the grass, but it was enough to shine out like a beacon to me). 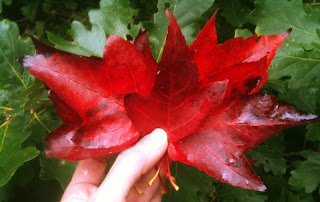 I had a closer inspection of the shocking redness, totally FABulous, and was relieved that the colour which allowed the red to sing out the best was my favourite after all - GREEN!
So don't get blue over the autumn, not yet. Not ever.
Next up - Water Colour workshop (Landscape, Skies and trees) Belfast.
Potrait Drawing, Portfolio Prep, Big Drawing and Oils.
Contact - email, julie@juliedouglas.co.uk
Posted by Julie Douglas at 12:09