Sky Portrait artist of the year - the movie!!

This link takes you to the Sky Portrait website, and gives you a series of 2 minute films of all artists doing their paintings.

https://www.skyartsartistoftheyear.tv/portrait-profiles/
Posted by Julie Douglas at 09:32 No comments:

SKY Portrait Artist of the year, 2020 - the filming

This was the most stressful painting experience I have ever had, and it was exhausting, thrilling and, in a strange way, exciting all at the same time. Having done so much prep, all I wanted to do on the day was get ON with it, and found it difficult, at times, to even speak to the camera as I was so focussed. I felt nervous but ready - and didn't want to let my team down. SEVEN of my students flew from belfast to London to support me and watch the proceedings, and my brother and his partner also came, so I felt well supported.
The venue, Battersea Arts Centre, was excellent, with consistent lighting and lots of space. There were cameras everywhere, with each artist easel having it's own camera in front and behind.
It was the first time that noel Clarke had sat for a portrait, and he was anxious in case he didn't do a good job. He needn't have worried - he was fantastic at sitting still and he was lovely to paint.

When I did my practice paintings, I worked sometimes from the model, and sometimes from my phone - I found that my phone was quicker, and that if I started from life, the camera wouldn't 'see' the same angle that I did, so it needed to be one or the other. If someone is going to sit still for four hours for me to paint them, then it's the least I could do to work from life. Most other artist, I understand, didn't do this. Great pity. On the other hand, this was less a paint-a-thon and more of a race, so whatever is the quickest! So I put my fastest-music in my headphones (ABBA! Not even joking!) and got started. 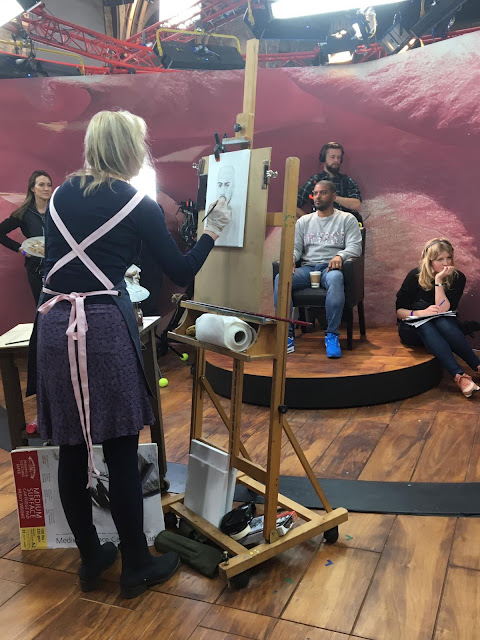 Hard enough as it was to paint in such public circumstances, the worst bit was being taken outside at regular intervals to 'talk to the camera' - nightmare! I don't even like having my photograph taken, so this was torture. Though the crew were all absolutely fantastic and lovely.

The quietest time was during the lunch break, when the hall emptied. Many of us continued painting, glad of the uniterrupted time to get as much done as possible. Even so, it was a marathon right up to the last minute. I didn't walk around the hall at any point - on the far side from my space all the self portrait were on the wall, but I didn't want to see ANY! (no room for nerves!)


With about 10 minutes remaining, I could hear one of the producers whispering to the artist next to me, asking 'what could possibly go wrong?', and I knew that she'd be asking me next. My goodness, there were so many potential answers to that question, mostly of the non-arty variety... and when she DID whisper, Julie, Julie what could go wrong?, I just hadn't the time to stop painting and said 'I have no words', and ignored her! Oops!!! It was a relief when we were told to put the brushes down..

I was sorry not to get through to the next round, but I so enjoyed the experience. And, I'd do it again!!

Self portraits aren't really my thing. But when you enter a competition, and they ask for a self portrait, there is no option... I only had two weeks to complete it so had to decide very quickly on a composition that might attract the judges eye, and work round the clock, between classes, to get it done. I used to play the Euphonium when I was at school and was borrowing one from a local brass band, so decided to get a few distortions going in...

I happily admit that when I got the phone call from Sky saying I had a got through to the televised heats, I was slightly in shock. Oh yes! Oh NO!!! The challenge is to paint a portrait in 4 hours, while being filmed constantly, with a live audience, and popping outside at regular intervals to be interviewed...

So I had about 6 weeks to practice painting portraits, in 10% of the time I would usually spend on a painting. I would like to thank everyone who so kindly modelled for me. Most sat for me in the studio, some let me take a reference photo. I really enjoyed the process and all the sitters ejoyed it too, saying they were surprised at how relaxing it was for them. I can't say it was 'relaxing' from my side of the easel, but I learnt a great deal. I managed to complete 15 speed-paintings before the programme was recorded, of David, David, Claire, Conor, Ben (three different ways!), Catherine, Rachel, Ken, Amanda, Alison, Rory, Clive and Jonny. You are all beautiful and much more beautiful than I managed to capture in the limited time available. Thank you so much.

Here are some of the practice ones - and yes, I ALWAYS did a drawing first, and included that in the 4 hour time limit. Each drawing took around 45 minutes, leaving me 3 hours 15 minutes to paint.


I will write another post about the day of filming...

SKY Portrait Artist of the Year, 2020

SKY Portrait Artist of The Year is a much loved programme, a favourite with not only many of my students, but lots of my non-arty friends too. It's a delightful watch, and artists are not judged harshly, but encouraged (and cajoled) by the judges and presenters alike.

The challenge for artists is to try to complete a portrait in just four hours. Perhaps 'challenge' is the wrong word - 'madness' might be better! If you have never seen the programme, you can watch previous series on many different platforms, including Now TV, Netflix and Youtube.

The 2020 series is about to start, with the first episode airing on Tuesday 21 January 2020. If you watch on Tuesday 28th January, you may see someone you recognise...! (or perhaps several people you recognise!)

I'm not allowed to say more now, but instead I will show you this painting, which was one of 15 practice paintings I did, to work out how to complete a head in just four hours. Considering that most of my artorks take around 40 hours, 4 hours is very short.

Posted by Julie Douglas at 16:05 No comments: