The challenge of taking up oils, from scratch.

Oil paint is described as 'the king of all mediums' for good reason. It is unlike any other paint in consistency and performance, and it takes perseverance and a touch of determination to keep going through the initial lessons. (er, and the later lessons...) Like many things which are new to us, we can get disheartened all too easisly, and while I regularly ask students not to judge their efforts, it is difficult to do that! Many people want everything to be perfect first time. A desire which is not helped by the fact that our expectations of ourselves rise as we improve, meaning we often don't quite achieve what we want even though we are improving. The notion of perfection itself is a dubious one anyway, but the creation of an oil painting requires several (imperfect) stages, many of which are unattractive, off balance (tonally) until completion, and would often beneift from an extra layer, or two or three. Once, even though I was experienced in oils, a portrait painting just wasn't going the way I wanted it to. I could have started again, but feared just reaching a similar-but-different state of disatisfaction, so I just kept layering the first one. It took seven layers - SEVEN! And that's ok. I think it would be good to remember that the joy of painting is in the PAINTING, not the finish. If we can work it that act of painting itself is the fulfillment we seek, rather than the finish, then we would recognise more regular 'success'. It doesn't mean that we have to endure the mediocre, or not critique our work or not get frustrated, but sometimes, jeez, GETTING to the DESK is an achievment! Here are some examples of studies and work in progress from the past term. 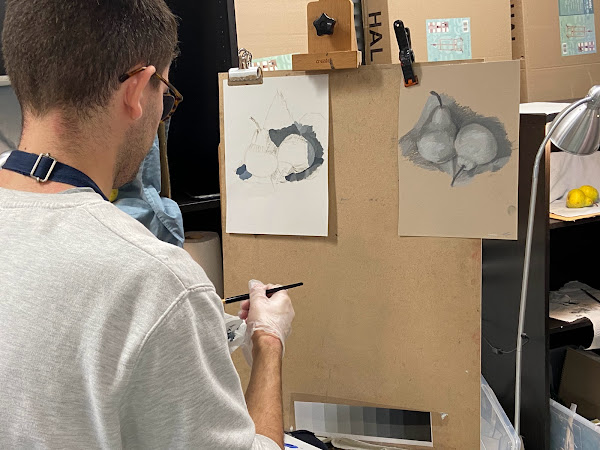 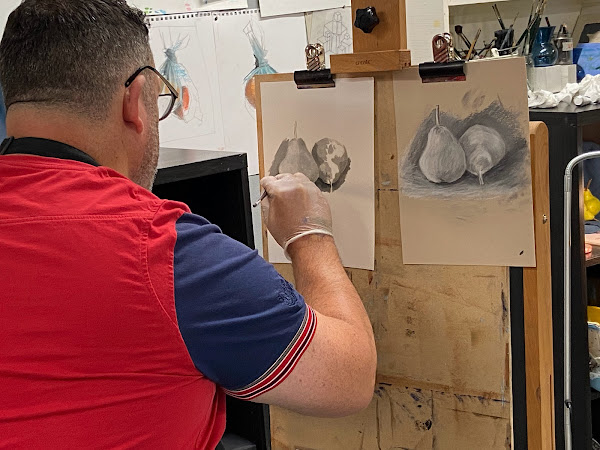 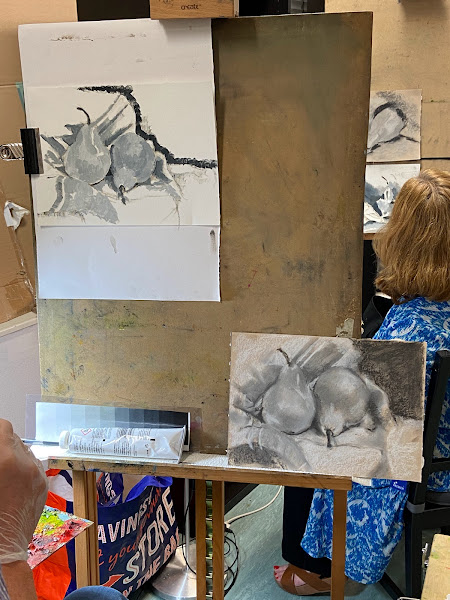 We have used various techniques. term started with observation drawing, then on to black and white painting so students can become familiar with the texture of oil paint without the extra concerns of working in colour. 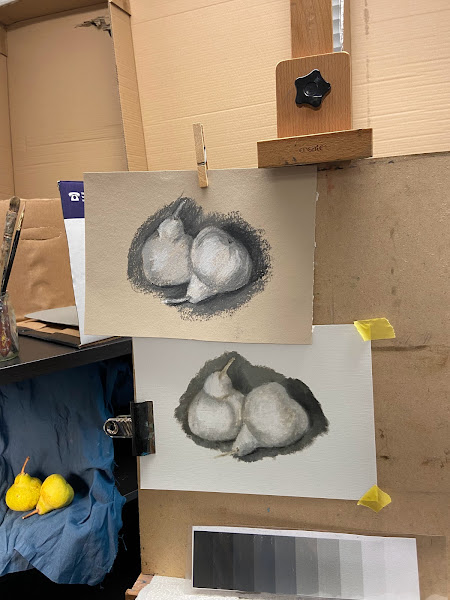 We followed this by doing the same subject in colour - so the SUBJECT is familiar, and students get to grips with colour. 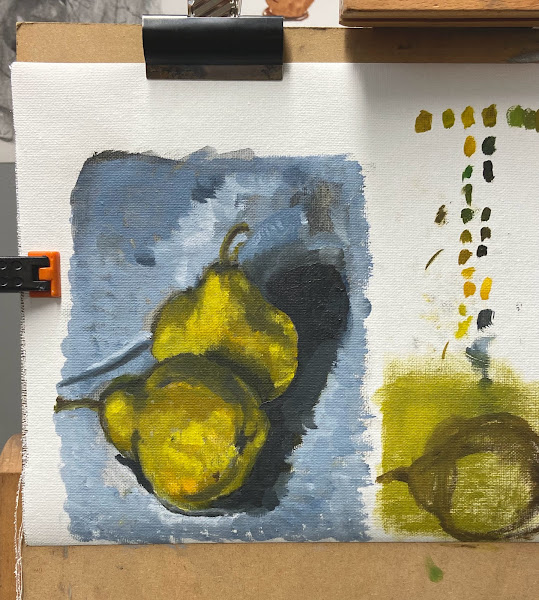 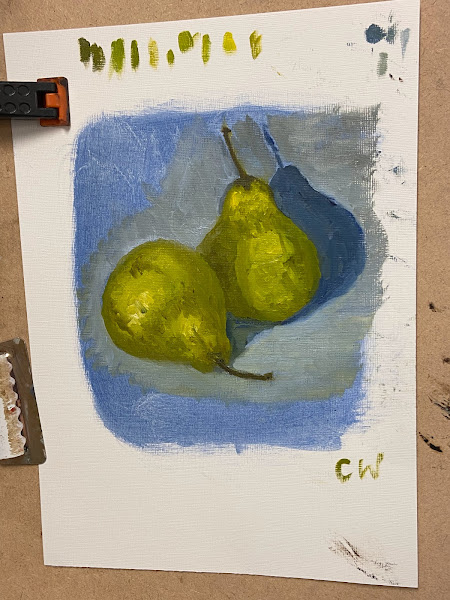 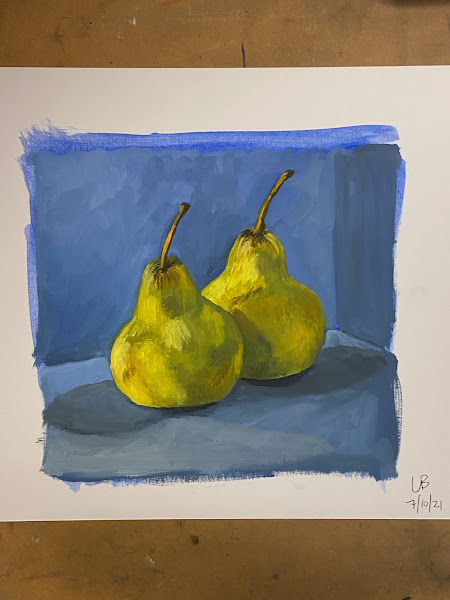 Another technique we used this past term was using the underpainting layer as a proper tonal 'support' for the second colour layer. We used Raw Umber to paint the underpainting in one session, and the next week painted over it with French ultramarine to get impactful results - a time-efficient method. 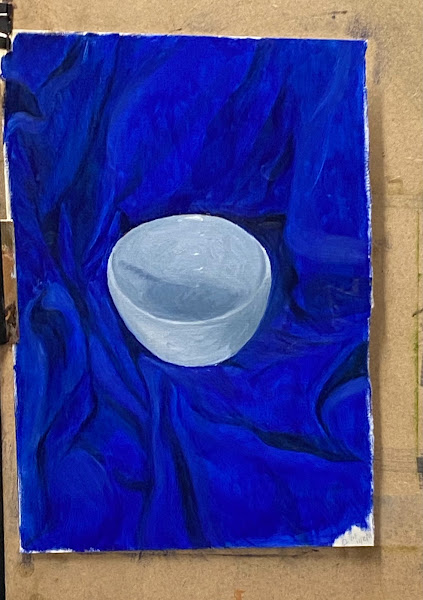 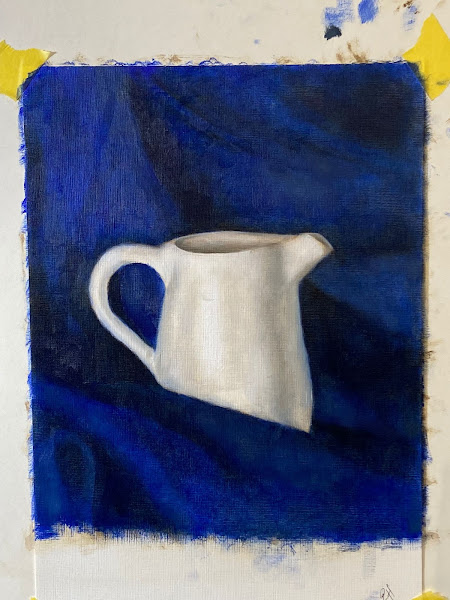 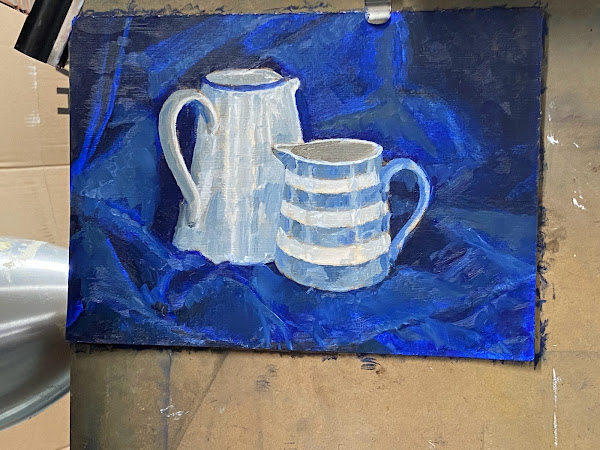 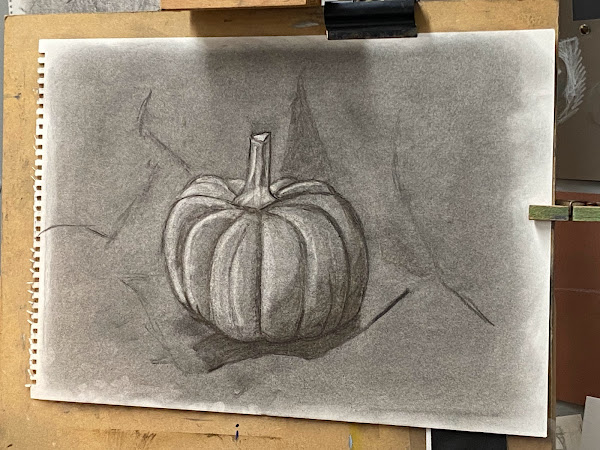 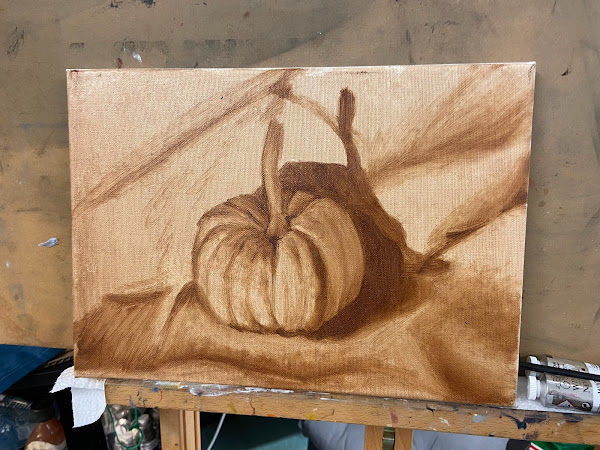 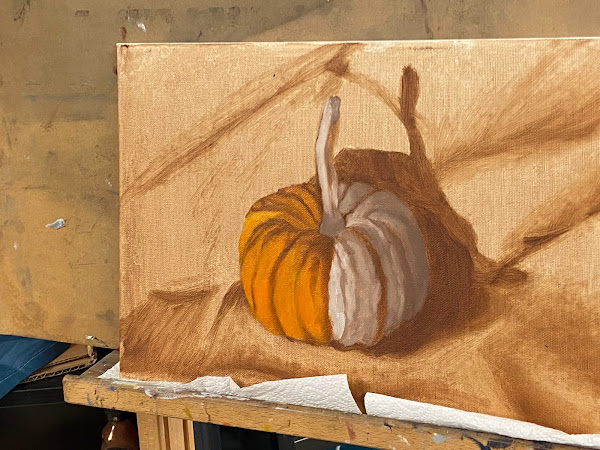 Finally, a lovley colour painting which took a couple of sessions. 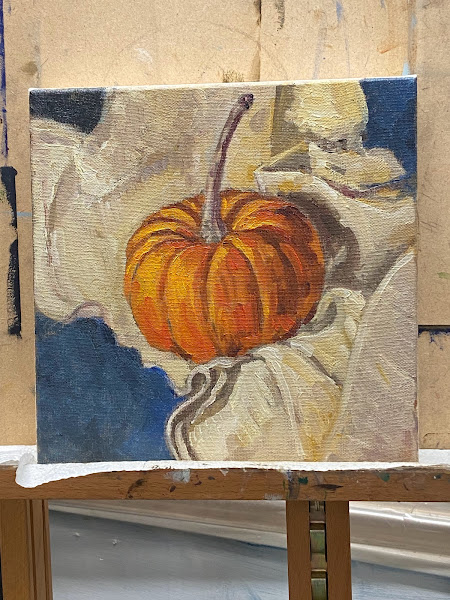 All these lovely artworks were done by students who are new to oils - they have all made an excellent start! For info on all my classes, in drawing, water colour and oils, please email julie@juliedouglas.co.uk
Posted by Julie Douglas at 20:26 No comments:

I thought it would be fun to end the term with students painting their favourite Christmas decoration. The first image below is by Heather, who drew using coloured pencil on tinted (grey) paper. A really lovely and dramatic drawing. 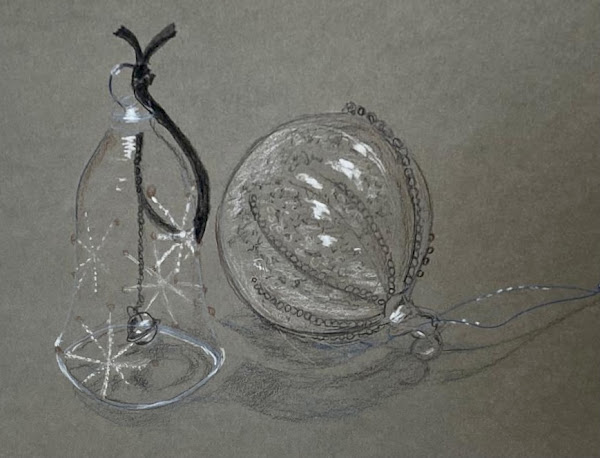 The next images are in water colour, all done be students sitting at home, using Zoom to connect with the other students. I am so grateful to whoever came up with the idea of online learning. It has been a saviour over the past many months. 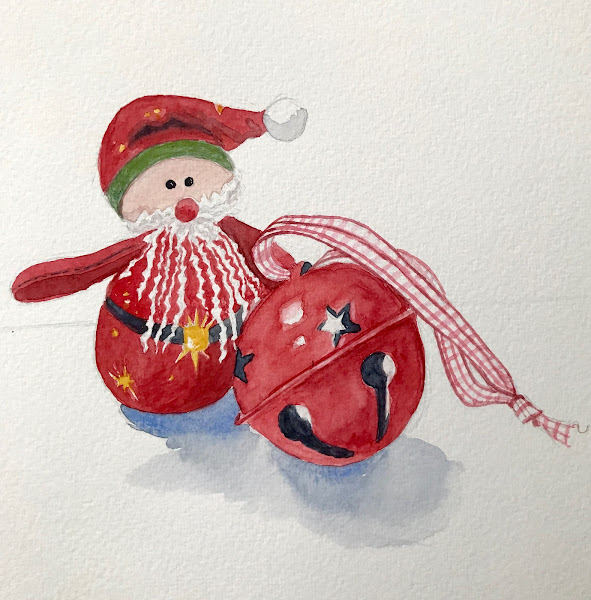 Above, by Christine McC, below by Cathy. 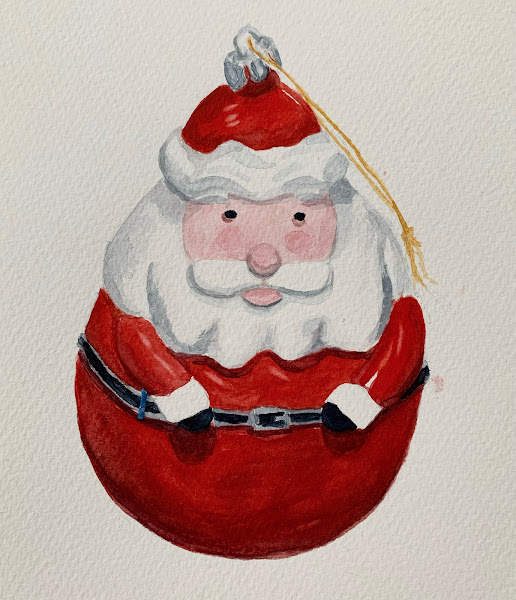 This is the subject that got the most laughs out of my students as they worked! Don't get me wrong - we have a lot of fun every time (mingled with a little torture...), but this was a different league of mirth. Gennie, who was painting on Zoom in County Clare, spent much of the morning tittering, as she painted a litle robin that she had knit for the Christmas tree. In fact, she has an entire flock! 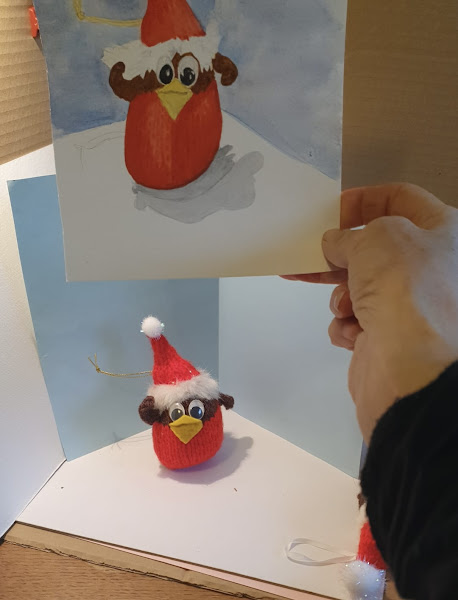 For info on weekly drawing and painting classes please email julie@juliedouglas.co.uk
Posted by Julie Douglas at 13:02 No comments:

Holly has such glossy dark prickly leaves that are irresistible at this time of year. Variegated leaves allow for lovely layering, which is the basis of water colour painting. Here is a selection of students artworks

One of the challenges of water colour is deciding on the order of work. Light first, moving to darker colours with subsequent layers is the preferred method, though of course this can be played with and manipulated. To create crisp-edged veins, often the best way is to put down the vein-colour first, then allow to dry. Then paint the darker colour over most of the leaf, APART from the vein, leaving the paler colour showing and pushing the dark colour as close as possible to it to 'create' the vein. 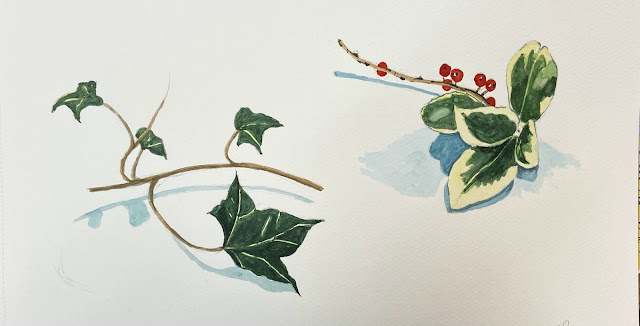 For softer transitions of colour, working on a damp surface is the key, though just HOW damp is learned through trial and experience.
These artworks were done in one of my weekly classes, which last two and a half hours. Frequently things are not finished in the time, which is why sometimes the images shown here are not completed. However, the point is the learning, not the race to the end. 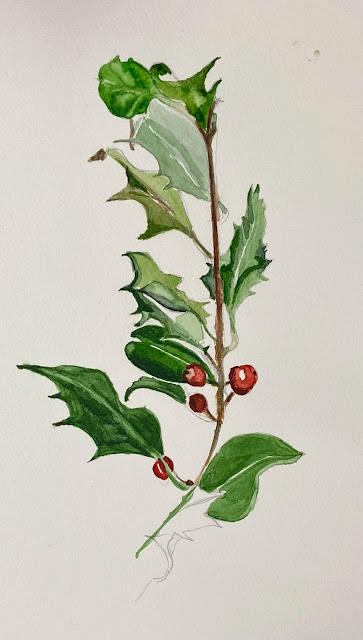 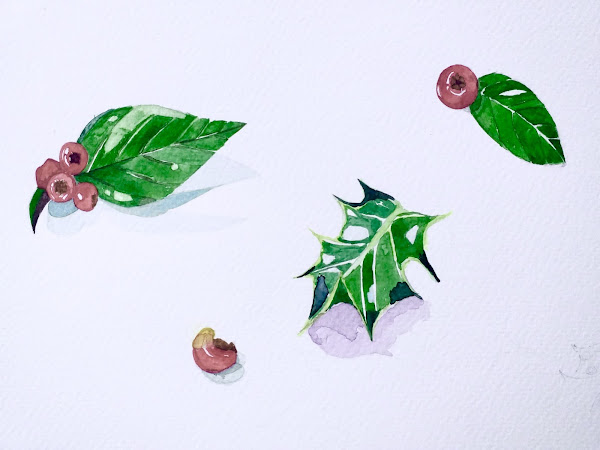 Above - lovely artwork by Toni, who has only been painting for a few weeks! For info on weekly classes please email julie@juliedouglas.co.uk

Posted by Julie Douglas at 09:38 No comments:

It's lovely to work using seasonal subjects, and what's more seasonal than the giving of gifts?

So I wrapped a few Tupperware boxes in Christmas paper, and after an hour or so I was feeling quite festive! 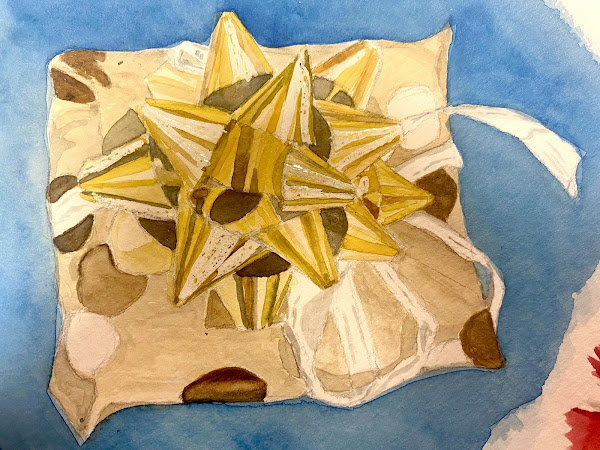 Above - lovely water colour by Nicky

Drawing and Doughnuts and Queen's University, student artworks. A well being session

I recently gave a drawing workshop to a group of students who are studying at Queen's University, Belfast. they were from all different subject areas, from Economics to Philosophy, languages to IT. Every subject, except art. I admire universities and colleges who encourage student interaction outside of their immediate comfort zone, and this mix of students paid attention and came up with great results. I appreciate that some of them may have turned up because of the bribe of 'doughnuts', but they all drew while they munched! 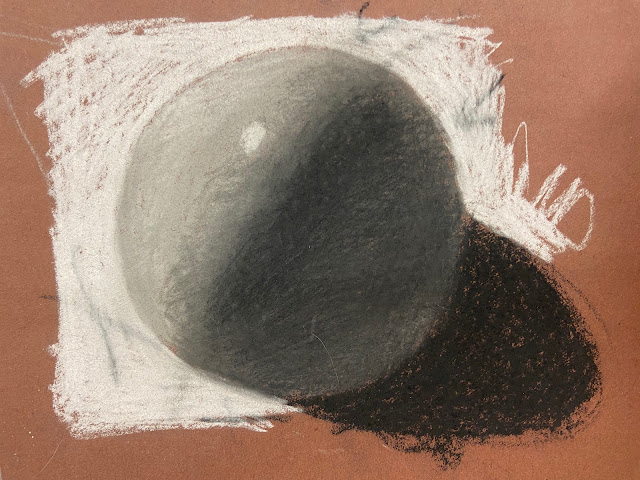 The challenge for me was that I only had an hour or so. What to teach for such a short period of time...? I decided on spheres, using compressed charcoal on tinted paper. This medium is fairly swift to use, and the lecture was about LIGHT and SHADOWS. 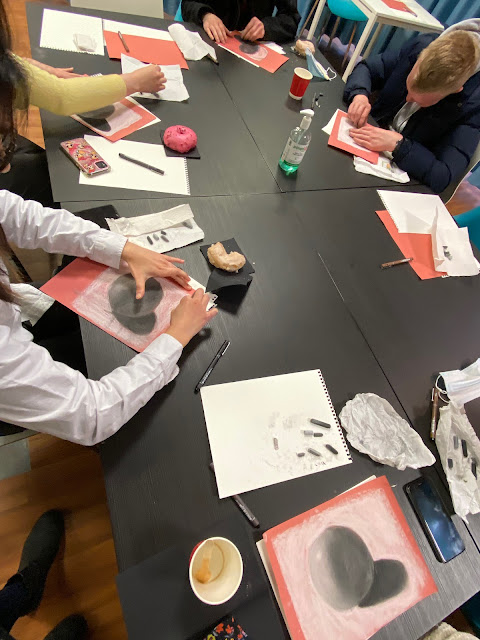 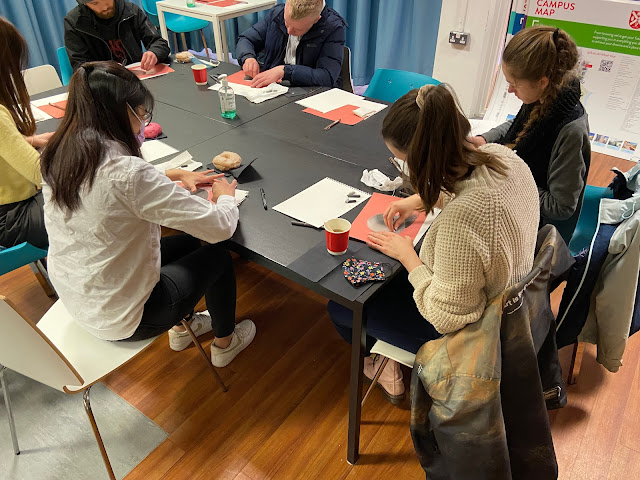 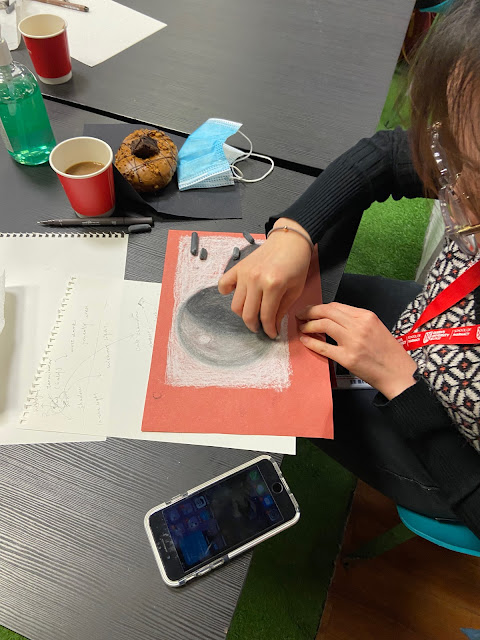 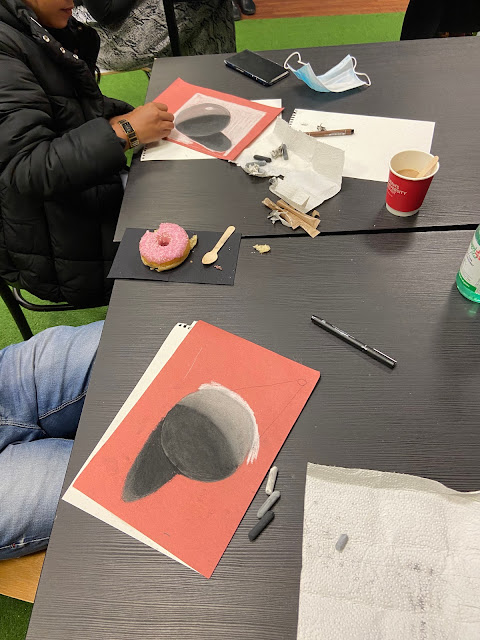 It was good fun to go out of the studio to teach for a change.

Posted by Julie Douglas at 17:49 No comments:

Hallowe'en got me thinking about trick or treat, so I opted for treat and found an old fashioned sweet shop in Bangor. The choice was enormous, from lolly pop swirls to mint humbugs and cherry lips! I got bags-full of a variety of shapes and sizes, looking for patterns and contrasting colours to give maximum visual joy! Here are a few students lovely artworks.

Some opted to draw on tinted paper. This works really well for coloured pencil, and saves a fair bit of elbow grease regarding background tones. It's also lovely to ADD white, rather than leaving blank white paper to create light areas.

Classes are currently in studio with the option of Zoom.

Posted by Julie Douglas at 17:19 No comments: