Another look at tone and all the lovely qualities of observing light, without using colour. Nothing improves your colour awareness more than not using it.. 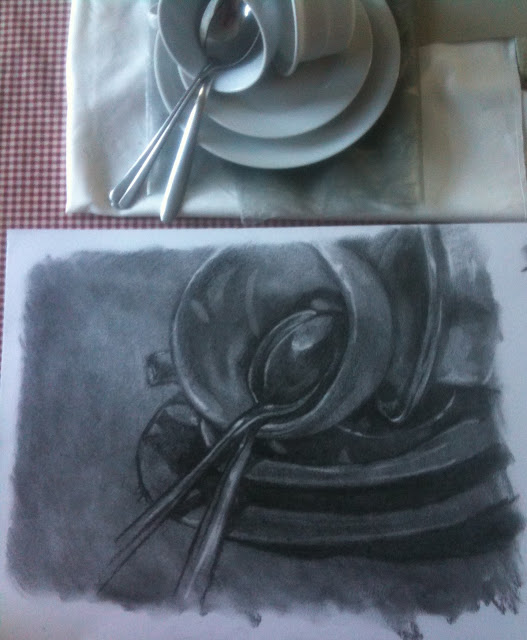 Recently I attended some talks at the Art College and took my evening class along to one of them. Afterwards we headed round the corner and did some speed drawing and Thinking Exercises in the foyer of a hotel. It makes a good change to work away from our usual environment, and everyone enjoyed the experience (even if it only made them happier to get back to the studio this week...!). 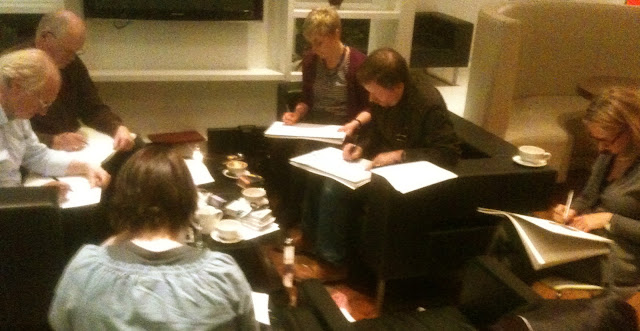 Email julie@juliedouglas.co.uk for details.
Posted by Julie Douglas at 08:13 No comments:

the art of letting go, or mapping for treasure.

Letting go of the end. That's a harder task than it sounds. We are so end-loooking, or even end-demanding,  that sometimes we forget that most of the time is spent in the getting there, rather than the end itself. And that the end is when we simply... start the next drawing. So we need to really love the getting there, as that is where most of the time is spent. Recently I had an excellent student spend a couple of days with me for a Masterclass, and even though she is an accomplished painter already, all of us benefit from spending time with a creative Other to have our batteries recharged, be offered a slightly different perspective, and to take the odd dare. Or two. 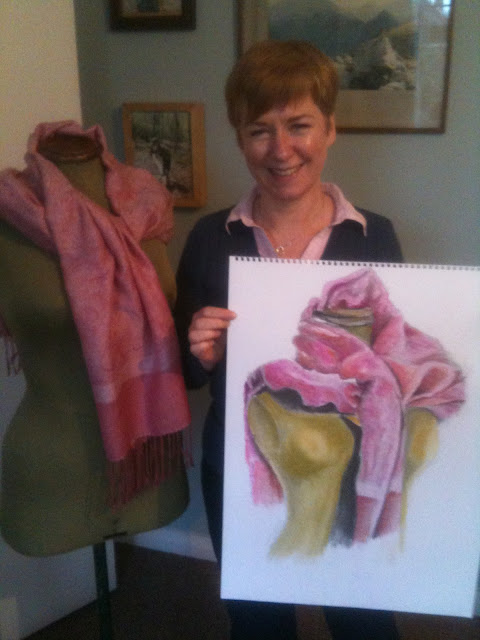 Colette, I found, was fearless, her attitude was, aw yeah! Her drawings were stunning and her new path is begun. Hooray! 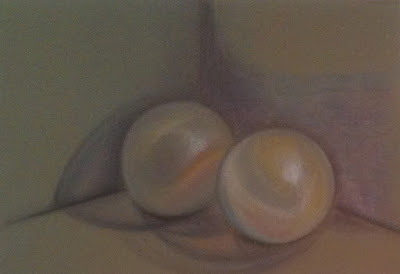 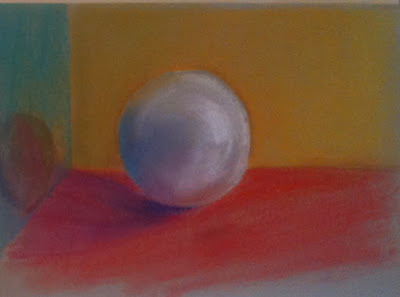 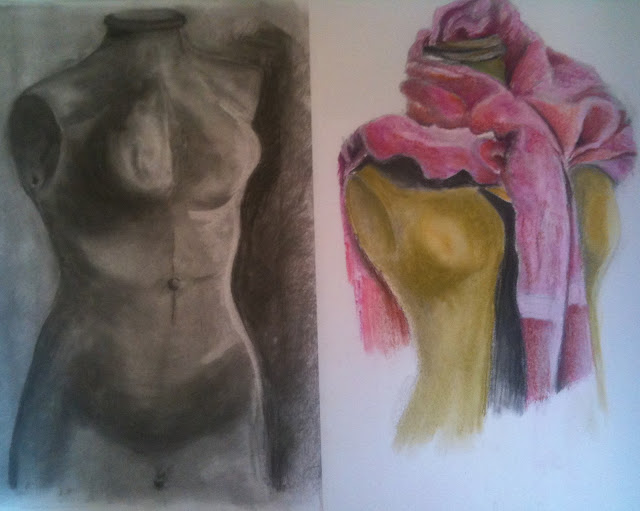 If we think about it as a path on a treasure map. There are many paths, and when we find a good route, sometimes after trying a few dead ends or some that get us nearly there but not quite, we find the better way knowing all the while that there is treasure at the end. The journey is where we are putting that treasure INTO the chest. By the time we reach it, we realize that we made all of it, as we travelled to get there.

There's nothing quite like having a change of venue to put new things into the creative mix. Recently I took my morning girls to draw in the City Hall, which was a great experience for all, including hearing the guided tour 3 times - on the third time, the guide actually mentioned us in the speech, so perhaps we've become part of the local history already..! (or another tourist attraction?) 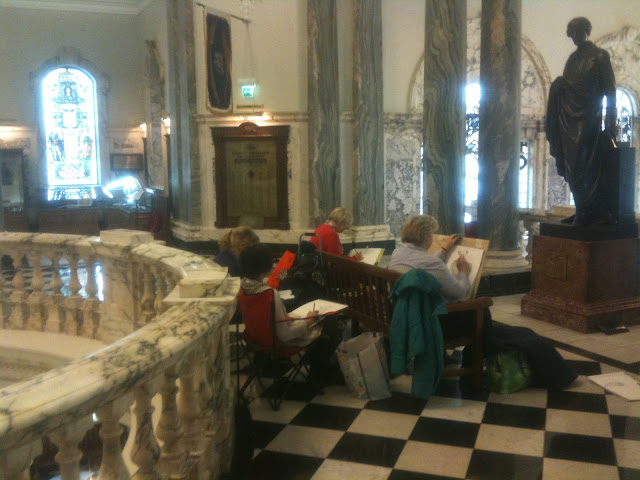 Drawing in the Rotunda, a very grand location.
To begin with, students were a bit daunted, especially being so visible to tourists, but they settled down and did some lovely drawings. 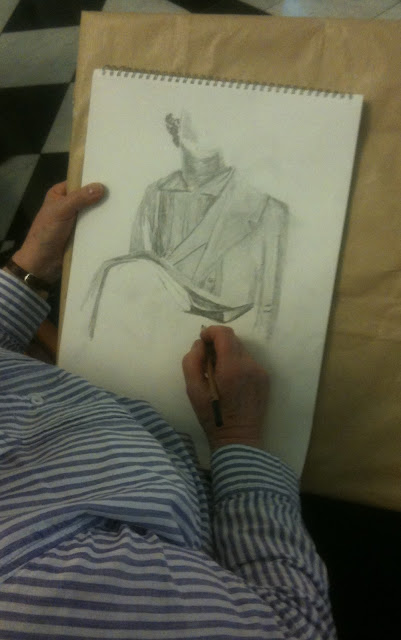 A wonderful tonal study by G. Bunting, student (above). 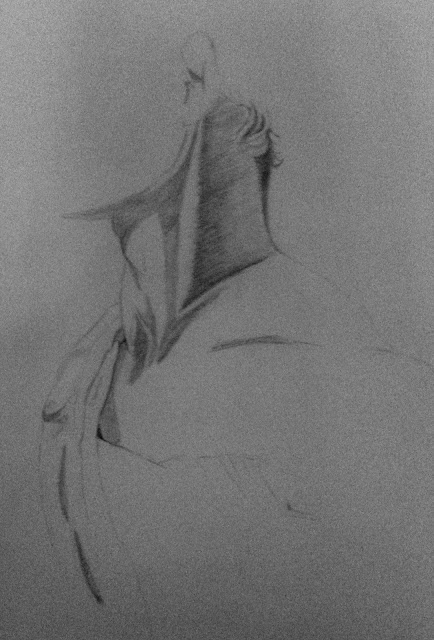 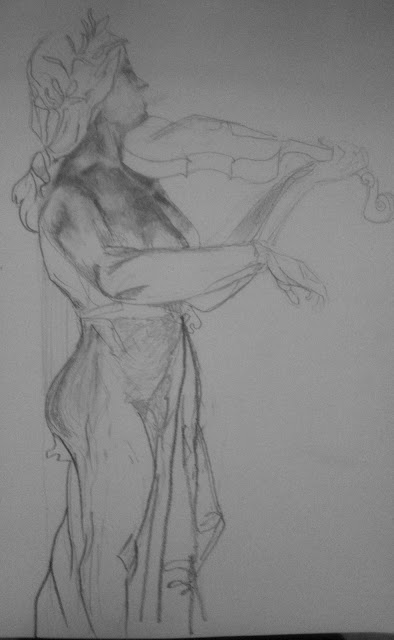 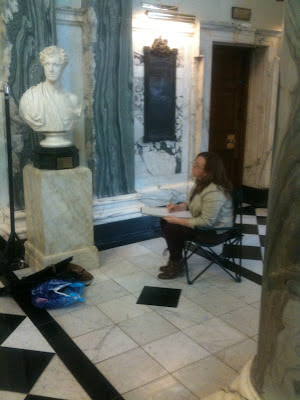 Deirdre working away, above.
I don't know what they put in the coffee (great coffee shop..) but on the way back to our drawing boards after a break, we all got VERY excited about the light flooding in from the stained glass windows, really beautiful! 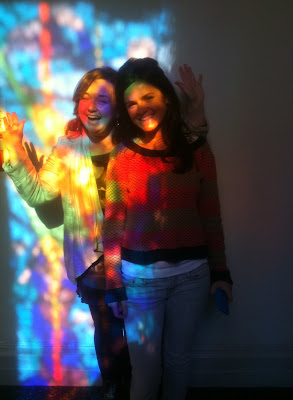 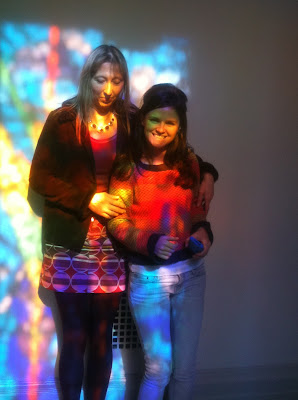 A Story of Portfolio, Passion and Power, from grey to rainbow.

Once upon a time there lived a boy in a small, grey village in the West of Ireland. And although the one street was plain and uninspiring, the people were kind. The boy loved art. When he turned 16 he came to my drawing classes and was so enthusiastic that he could hardly sit still, amongst the adults around him. He tried - for an hour he would clip his wings and do what I asked, then he would fidgit and jiggle and ask questions about different artists... And while he was immature and unworldly because he was young, his enthusiasm was honest and was a little spark in the grey surrounding him. Each month that went by saw him settle for longer at a time as he learned to become deliciously engrossed in his work, and as he improved, his self-criticism grew too. The better he got, the less sure he became. But he was sure of one thing above all others - he wanted to go to London. So when it came time to apply, I dared him only to apply to London, for his work was worthy, his spark was brightening all the time. My concern was that if he applied nearer home that he would lose his nerve and never leave the grey village and be sorry for ever. So he only applied to London, and when all around him were getting offers in Ireland, his nerves grew. His wait seemed never ending, until FINALLY, he heard. And I got the email saying, I GOT IN!!!!

That was last year. In September, stomach churning with fear and desire both, he headed to Camberwell, the University of The Arts, London. The first couple of weeks I got regular updates, as he settled and fretted and was OVERWHELMED by the colour, after growing up in the grey. He met students from all over the world, he found a job in a Chocolatier in Bond Street. I had to tell him that in England they don't say Pants, they say Trousers (an important distinction) and he soaked his experiences in like a sponge. His enthusiasm never waned, it grew even bigger. And he surprised me when he told me that he had chosen Fashion as his discipline - and the value of a core, foundation year shone through once again. In January he had to apply for Fashion - a very competitive choice - and he chose several London based colleges as well as Europe. His main choice, his biggest dream, based on what he had seen there, was St Martins in London. He had interviews everywhere and was offered places from each one. But St Martins have 6000 applicants from all around the world for 130 places. The boy had selected, of all the areas, Womanswear, so 2000 applicants, for 50 places, 25 for non-European students, and 25 for European. Tricky. But you have to dream.
He called me (this is unheard of, for students never have any credit) after dropping his portfolio at St Martins - he was so excited he could hardly speak, and at the same time, couldn't get the words out fast enough. He said that lots of people were there and left their portfolio's for inspection, and that St Martin's didn't do interviews (with 6000 applicants, who'd blame them..?!) and he was amazed to hear his name called out, and the head of course brought him into his office to chat to him. What could it mean, he asked? Well, it's a great sign, I said. And then the nail biting waiting began again, and each offer from the other excellent colleges were 'pleasing', but St Martin's, St Martin's...

So this morning I got a text at 6am. Not my favourite hour... I fumbled for the phone, and read the words - Unconditional offer St Martins. And so began an hour long text-fest, him on cloud I-Can't-Believe-It, me on cloud, Oh-Yes-I-Can!!! After a bit I got upset and told him I was so happy I was crying. And he said - Don't cry, you'll be coming to my final year graduate show:)

I sure will. (he'll be making my outfit, obviously..!)

Today, the boy will be floating on air and the grey village will know that his multicoloured journey has taken on a new and wonderful momentum. He is full of gratitude and amazement. I am full of joy and wonder.
The moral of this story is so important. They say that the future of the world will progress through art and creative thinking, that it is the creative thinkers who will be most saught after. So if you want to do art or your children are leaning that way, don't worry. Allow them - allow them to follow their dream, for if we don't have dreams, they can't come true. The creative path is so exciting and rewarding, and if it calls you, nothing else will do. It's a multi coloured rainbow of a world. The greatest gift this boy had was Enthusiasm, and the willingness to dream BIG.

The boy's name is Andrew. And already, he is a Star!
Posted by Julie Douglas at 13:49 3 comments: