Occasionally I hold BYOB art classes, which are a truly entertaining and enlightening experience, both for me as well as the participants! The atmosphere is light, and no one comes for The Drink, but for a one-off try-out of a bit of drawing and painting.
Everyone enjoys themselves, even the most nervous and reluctant attendants, and all are delighted with their new-found art genius. In fact, after one particularly jolly evening, I received a text from one lady while she was in her taxi going home. The text said simply, I love my mushroom. Well, AW! The ladies in the second photo were going on to a nightclub after the class, but by 9pm one said she was so exhausted after painting that she just wanted to go home and get into her pj's..!! 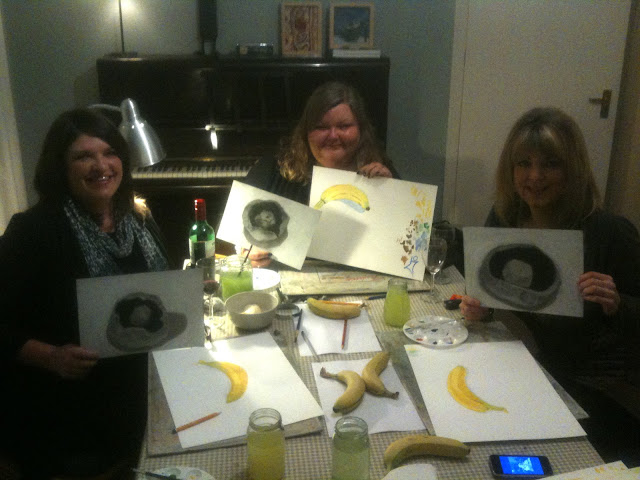 The last BYOB included a young woman who told me she's a scientist, and instantly bribed her way into my affection by presenting me with a Scientists White Coat when she arrived (I love a bribe, by the way), as I'd mentioned in an email that I was fed up getting oil paint on my clothes (mostly my elbows, when I lean in the palette, tsk..) So I'm delighted with it, even though it's ENORMOUS... So I've stuffed the pockets full, so I never misplace anything again.. Looking forward to getting it really slathered in paint... 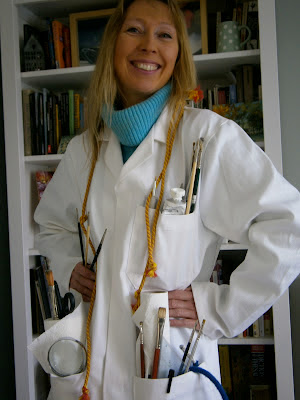 Up and coming - I have a portfolio course at the beginning of June and so far it's mostly boys who have booked. So if any girls out there need a portfolio, please get in touch!