The first painting I put on this blog was of chillies, which was part of a series for local shops, small paintings reflecting the shop which displays them. Todays post is another from that series, which is ongoing. It is Oil on canvas, size 9 inches by 7 inches, making it a really large cream cake. It was great fun to paint, as the folds of cream became quite voluptuous at that scale, and it always makes people smile when they see it. (Yes, of COURSE I ate them and they were as light as a cloud, as soft as...angel breath mmm..)  It was displayed in the bakery for a while and has now moved rather upmarket to the Boutique B&B round the corner, for guest to see while enjoying their Afternoon Tea! 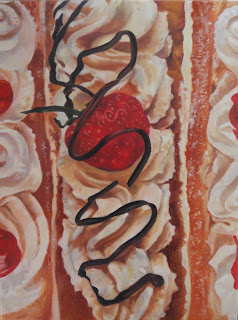 Painting on canvas is a particular torture. It is springy, which at first is disconcerting, but worse is that the paint bleeds - that was a surprise to me, coming to Oils after many years of dry media and Water Colour. I never expected oil to bleed, into the little grooves of the canvas. And while I am working on board at the moment, which has other characteristics, in comparison, the paint blends more deliciously on canvas, allows itself to slide arond the surface more willingly than on board...

Next up - new evening class in Belfast due to student demand,  so now two evenings and a morning class to choose from.
And in February, a Big Drawing Day, hooray! - in Dublin.