I love sheep. (and cows and chickens and pigs. ) This is one of the most complicated drawings I ever did in Colour Pencil... Its a pity it is reduced in size here - I really don't like seeing my work smaller, as it compresses and hardens the detail - if anything it looks better enlarged! It was the first in a series of sheep and the only one of the series that included so much landscape. I drew this a few years ago and it was the first large drawing I had done for some time as my children were small. I think that's why it ended up being so complicated - perhaps I needed to know if I could still 'do it'. The sheep belonged to neighbours in Sussex who had a Smallholding,  Sunbeam Farm, and I drew some of their pigs later, and chickens. And in fact, their children too now I think on it. 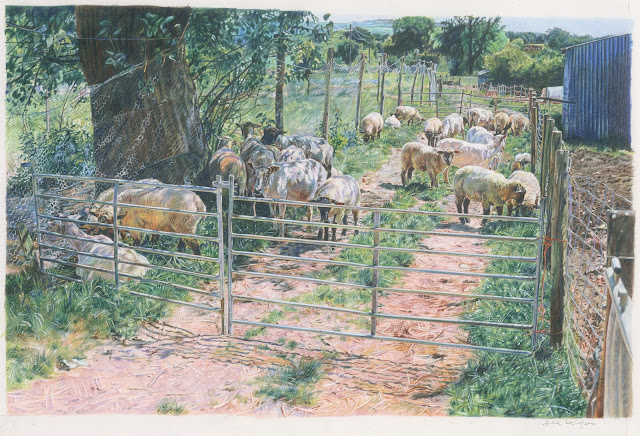 The chicken wire fence against the tree had me a bit cross-eyed, and looking at it now, I notice there are a lot of fences here - I like fences and gates. Notice the colours in the sheep - pink, green, blue... There is a LOT going on in this image, including a pig in the background. The blue distant hills are of Hastings, East Sussex. It took many weeks to complete.
Posted by Julie Douglas at 22:50