Preparation is almost everything.. David Gray's workshop in Belfast 2016!

In July and August this year, I organised two painting workshops in Belfast. The first was with David Gray, painting the portrait from life. Students traveled from all around the world - Canada, Florida, Finland, Greece, Italy, England, Dubai, Sweden and France as well as closer to home, Dublin and Northern Ireland.
The amount of planning putting together this kind of event is on the side of Enormous, but as I’ve been teaching workshops for many years, the main difference was that it wasn’t at my studio, but in a lovely large venue in town. I am indebted to my student Mark ‘what-can-possibly-go-wrong?’ McDonald, who went above and beyond the call of duty - not only did he help setting up the studios (checking that every easel was useable etc), he also constructed two stages for the models to sit on, AND helped transport everything. We didn’t travel light.

David arrived from Seattle with a couple of days to settle in and to approve and amend the studio set-up. Here is he having a walk along the lovely County Down coast, and experiencing his first Guinness (under a very Oirish green light!)

And so, the workshop began. We had two rooms with a model in each, so we split into two groups,   spent three days painting one model, then swapped models for three days more. The first day was spent putting down the grisaille underpainting.

Below - students hard at work. 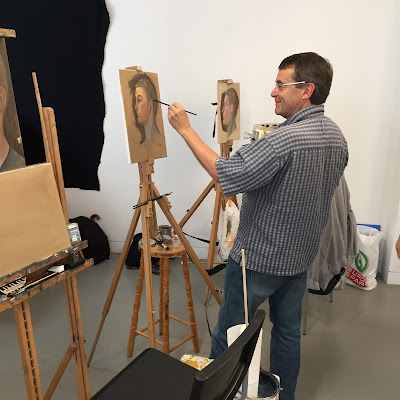 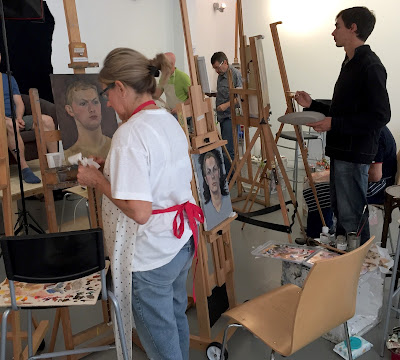 It was tiring work, and we relaxed together at the end of each day.

Images from the second half of the workshop in my next post!