There are so many photos here that I thought I'd show you the finished painting first! (to see the preparatory stages scroll below to the previous posts). I had two weeks from starting the canvas to my deadline, and while I thought I wouldn't manage it as I was teaching during the same period, I decided to go for it.

The initial stages are always hideous-looking. The best way to describe it is that it's an act of faith. We paint towards how it WILL look, seeing everything as part of the greater process.  I transferred a line drawing trace from my pencil drawing onto canvas, which gave me a blotchy placement guide, then did a base 'wash' layer to lay in some tones, going very lightly on the face, only on the shadow areas. This is the stage where the amount of work ahead becomes dreadfully apparent. Gulp.

Next evening I put in the flesh areas, the first layer of colour. The face and hands took about two and a half hours and were done in one sitting. Colour was laid in small 'tiles', and not rushed. 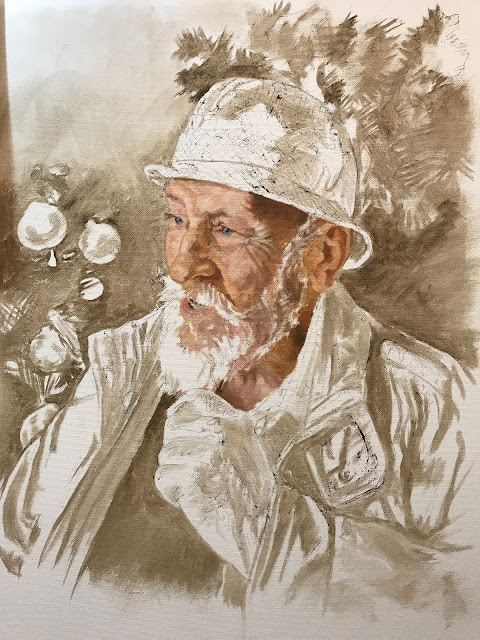 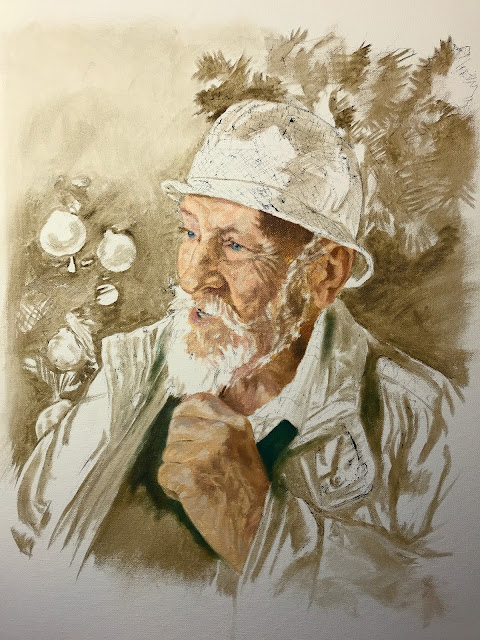 Between classes next day I whacked on the first layer of the coat... still 'tiling' but with larger strokes. 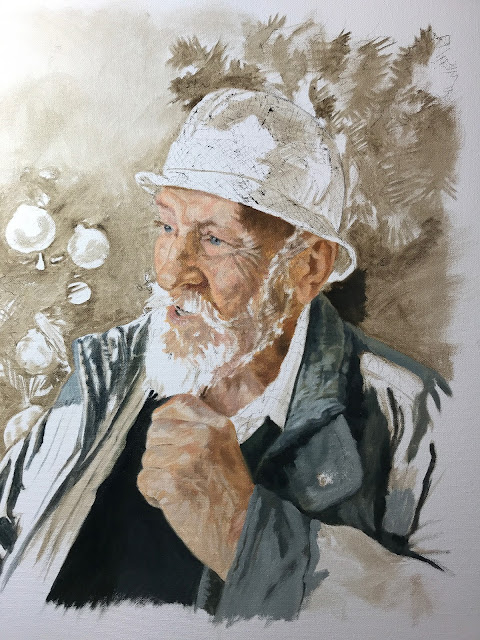 ...and scrubbed in some background colour (see below). 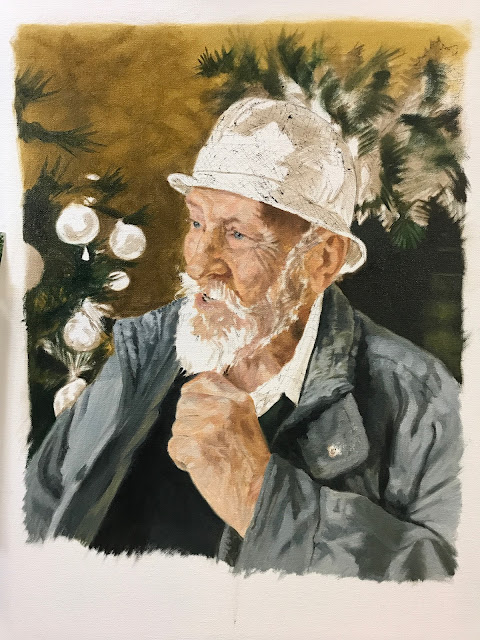 Saturday night and I had to address 'the hat', aaaargh...! Even in the drawing stage this had been a challenge, and I spent a few hours redrawing with pencil on the canvas, then layering in the pattern using raw umber before painting the lighter chunks in between the stripes. Then I slathered on some beardy tones. 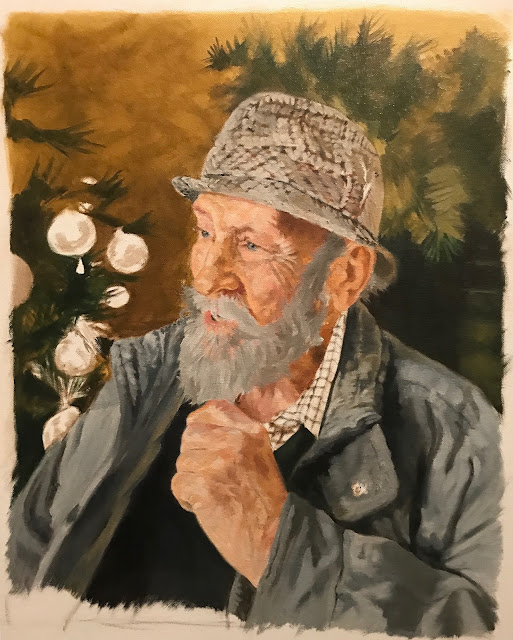 I gave the beard a second look, and decided it looked like it had been stuck on.. So I darkened it a bit... 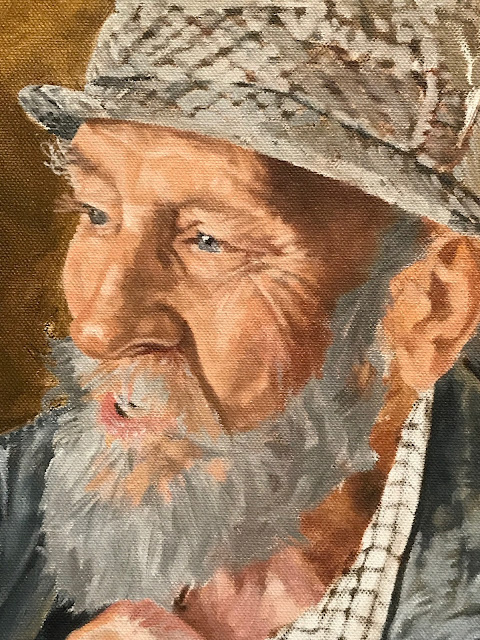 ...then decided I needed more flesh tones to work beneath it so painted more shadow-colours on top (see below). It looks like the photos are out of order, but they are not. So, I painted a beary area, then let it go by painting over it - always be prepared to remove, rethink and repaint. 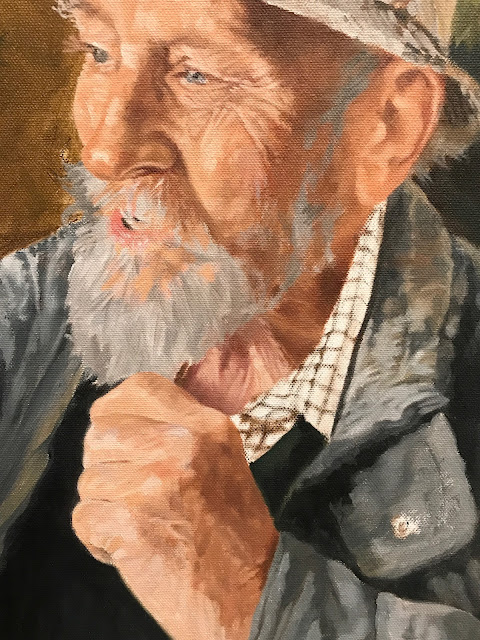 I then gave the flesh (face and hand) a second (final) layer. 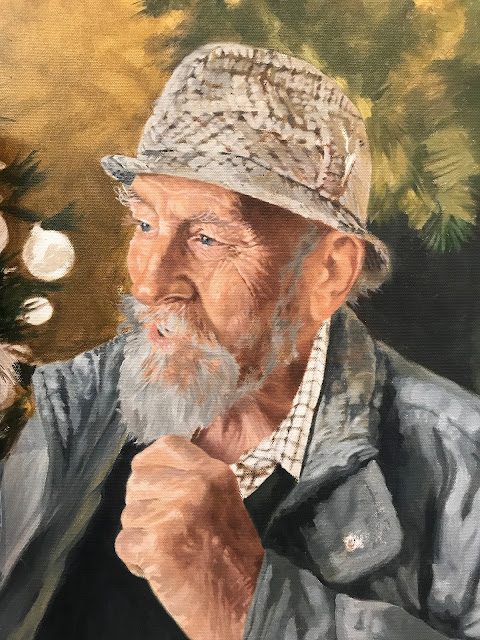 Then it was Friday, so I crammed in a few hours before the Friday Night Life class, and tackled the Christmas foliage behind the head. Once I got into the swing of it, this was fairly quick, and quite satisfying/a relief to cover a large expanse of canvas.

Saturday was the Marathon day. I did 12 hours straight, with a one hour break in the middle for a cuppa tea and a chat. I painted a second layer on the coat... 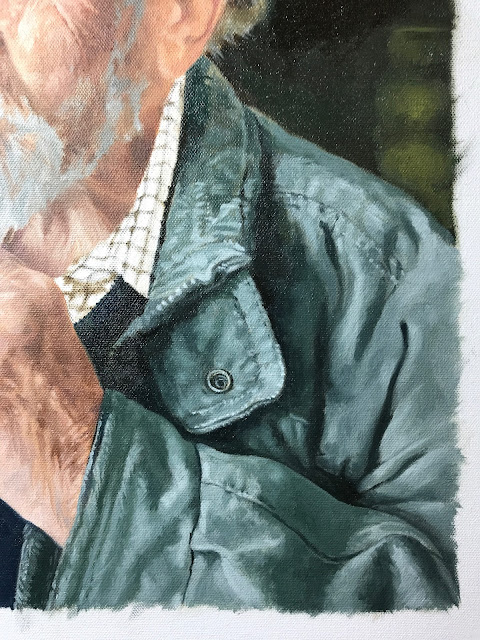 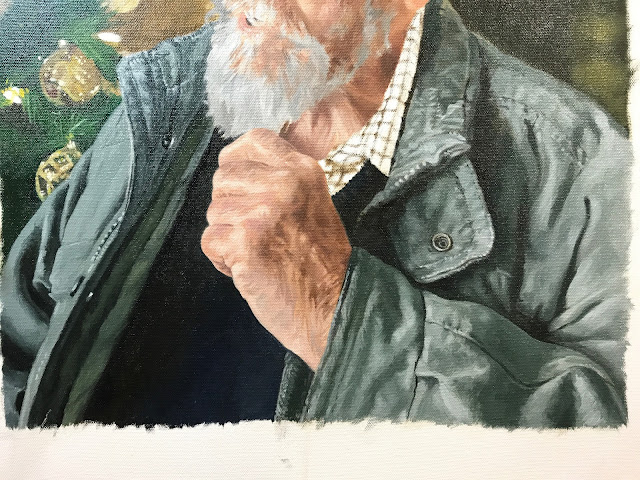 ...and after dinner, which my son kindly brought to the studio for me (what a star!),

I could put the hat off no longer...

The 'secret' to working on something complex like this lies in what you're listening to. All day I'd had the BBC iPlayer in the background. I'd had the final of masterchef on, several episodes of 'The Twinstitute' (I can only have documentaries on, otherwise I can't paint!) and for the hat it was two hilarious programes by Billy Connolly, so I actually laughed my way through it! By 11pm I'd had enough and packed up. This is how it looked - all done bar the beard and the baubles on the left. 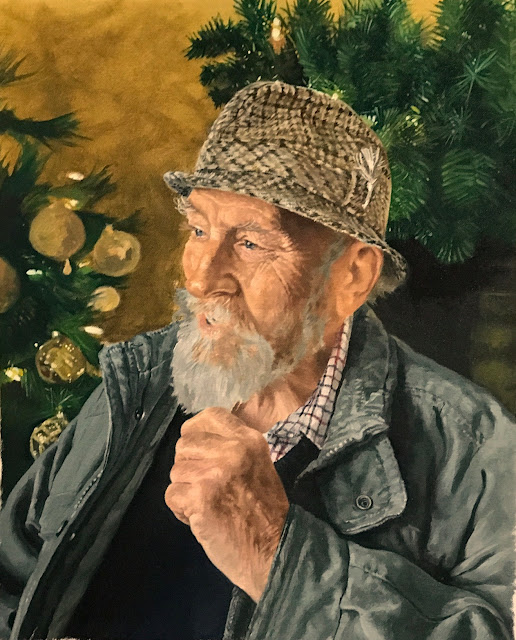 I took Sunday off as I was tired.. And Monday was deadline day. I worked on the beard... 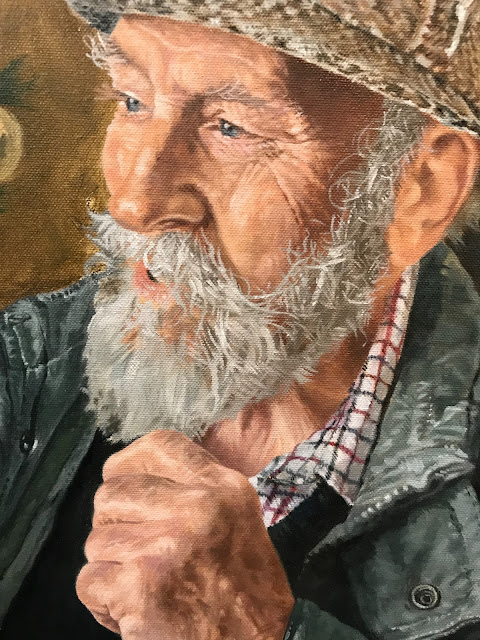 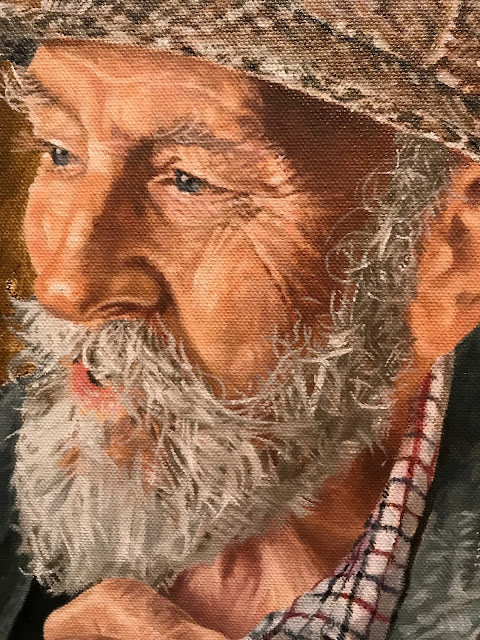 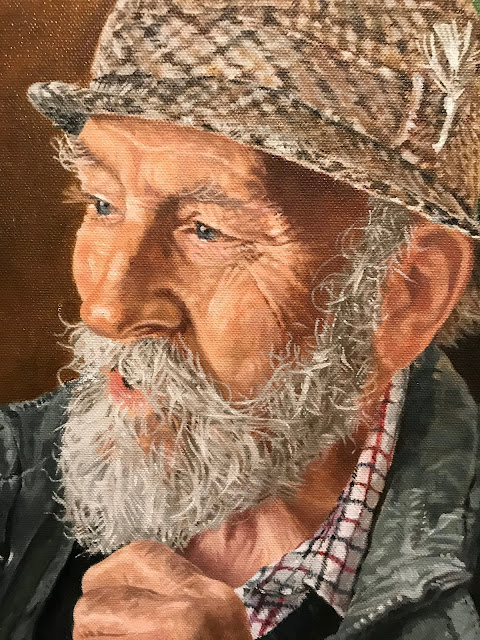 ...darkened the background, tweaked the 'join' between beard, eyebrow and background, and completed the baubles. Just in time for the deadline! PHEW!! 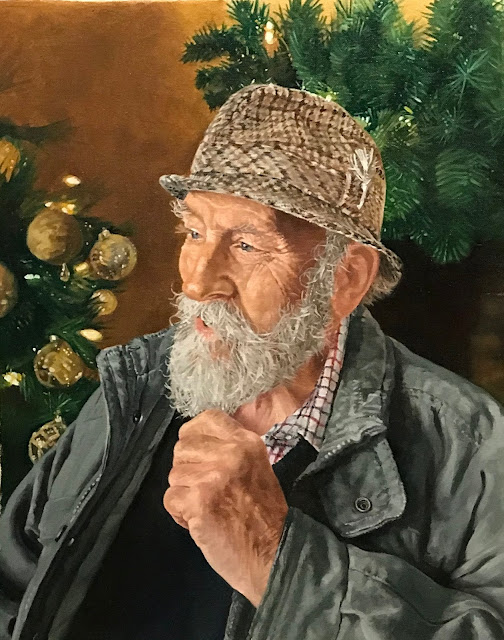 For info on all workshops please email julie@juliedouglas.co.uk