It's been a very busy, very creative summer here in Belfast.

Matt Weigle's oil painting workshop continued for five days at the end of August, and all the students loved it and  learnt a lot.

Matt spent two and a half DAYS setting up the studio space, so that each shadow box had just one light source and each box was lined with black fabric. The intension was for each students still life to be as uncluttered as possible so that we could get through each stage of Matt's workshop in the time, and finish a larger painting as well. Because Matt took such care in arranging the boxes, tables, easles and lighting, all the students had to do was select their objects, then hmmm and aaaa about placing them. Much huffing and pondering... This jug or that vase... an onion or plum...?


By the end of the first day we had completed our drawing. Day two involved transferring it onto two small canvases and one larger one.

Our aim after that was to put down an underpainting on the larger canvas, complete a black and white tonal study, a colour study where we were simplifying the colours (relying on the tonal study as a guide) on the smaller canvases, and later in the week, begin a second layer on top of the underpainting as a final more finished painting.


As I said, Matt had a daily requirement for us, and this helped focus us and stick to the deadlines. Here he is preparing and demoing the black and white study


So Matt would do the demo then we'd work hard to keep up. He worked much more quickly than us.. The studio was quiet (apart from the wind whistling from outside), as we concentrated.

One of the things Matt wanted us to do was to outline our transfer drawing with black permanent pen (this had to be permanent even if wet with turpentine), so that we wouldn't 'lose' our drawing during the underpainting. Some students were a tad sceptical about this,  feeling that we needn't go to those lengths to preserve the drawing.. However, we humoured Matt and did what he asked...

...and boy were we glad when Matt showed us the next stage.. The underpainting was very speedily done,  and the turpentine thinned the paint so much that without the black lines, all the drawing would have been completely wiped off. Ahem...


While the underpainting dried (this took overnight) we got on with the colour study, leaving the last day and a half for the larger painting.


An astonishing amount of work was produced during the week. The pic below shows Gennie's weeks work - she managed two larger finished pieces, because, well... some people work pretty fast!

And on the last evening we all had dinner together, joined by Peter Cooper (on the right) who helped Matt with his 'foreign language studies'.. Matt did a great job of learning to speak Norn Irish, and can say 'Brown' and 'Bout ye' in the correct manner beautifully. However, just as Peter was encouraging Matt with some colourful additions, Benedict, from Holland, who was sitting next to me, out of the blue said the most perfect 'YOU' I've ever heard..  This is good news, for I've adopted Benedict (though I haven't told her yet, it's a surprise!) 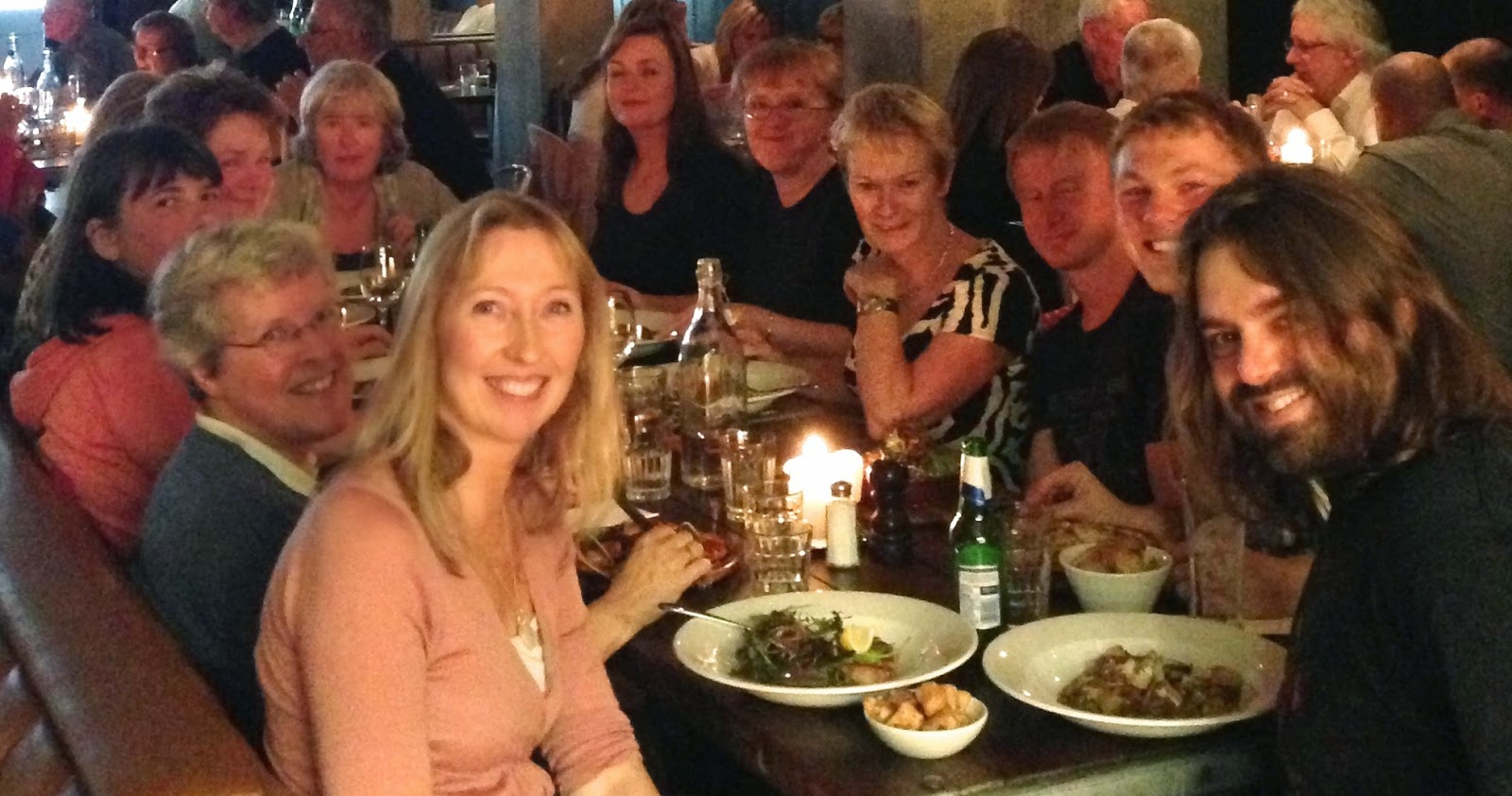 Below, some of the weeks work laid out to dry. 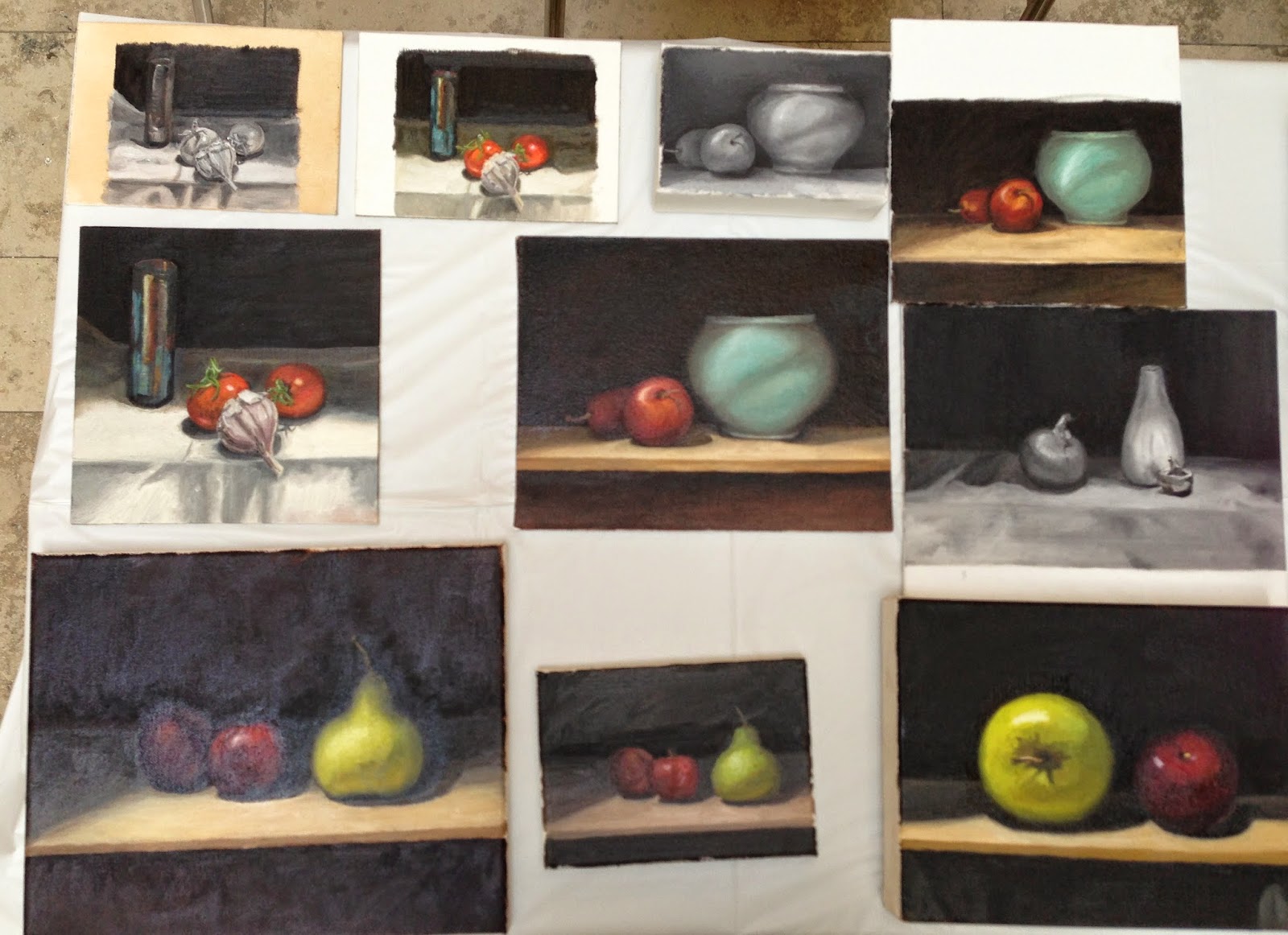 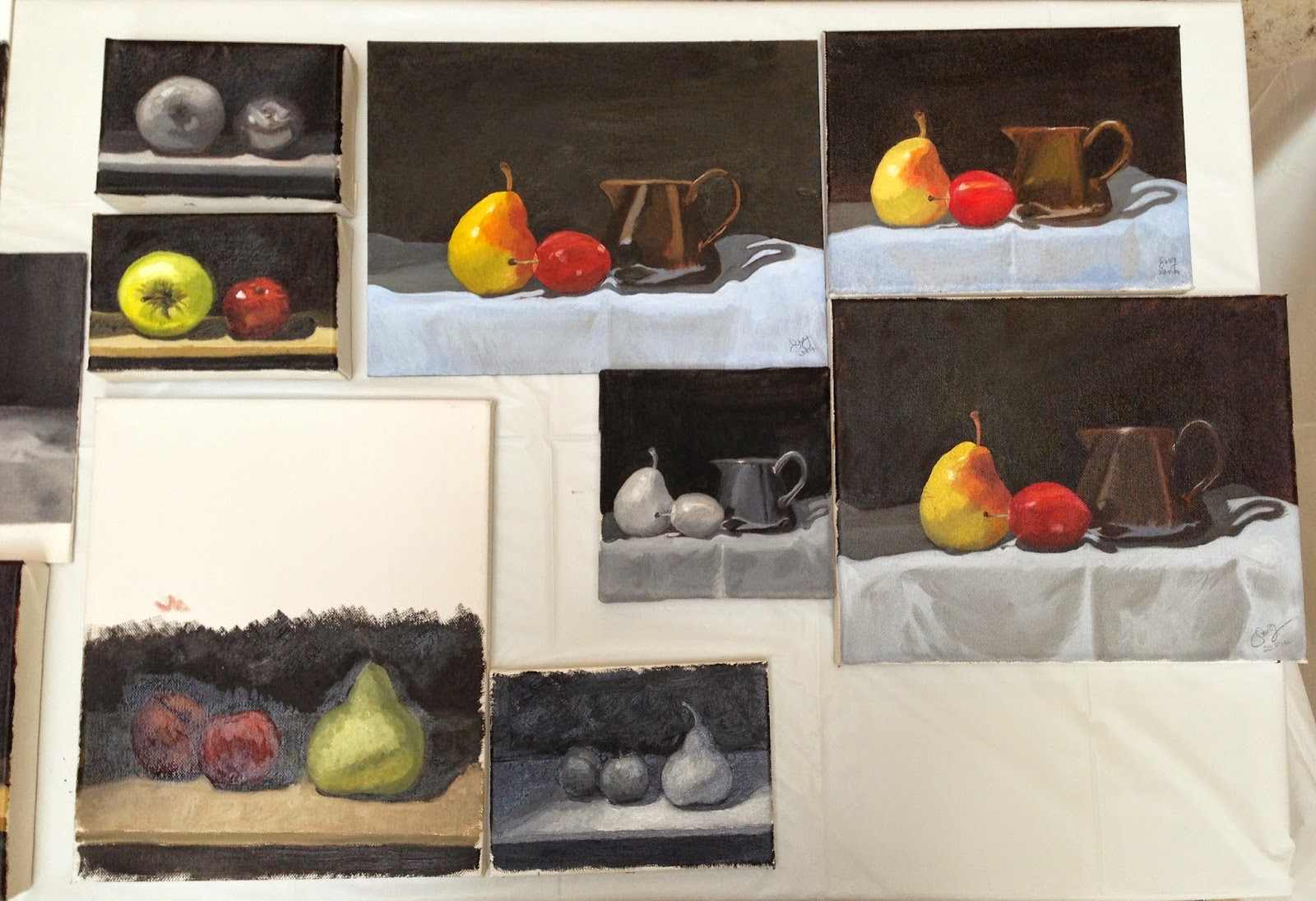 Matt was a methodical and careful tutor, wanting everyone to get the best from themselves. His teaching was authentic and sincere - we all had a fabulous week and hope to do it all again!

For information email julie@juliedouglas.co.uk
Posted by Julie Douglas at 21:40