I took one of my classes to the Ulster Museum this week to do some drawing. The aim was to tackle a subject which was much larger than usual - so what better than the giant deer, with its incredibly long antlers..?

After doing the bulk of the drawing I decided that I really had to continue over onto the other page - only later to realise it was actually the front cover of the pad. Never mind! It really does have a great impact on the composition, using the wide format to extend the drawing.


When doing a demonstration, there's always that moment where you wonder if everything will turn out ok, as working with an audience is a rather different affair. But, nothing like a bit of pressure to keep ones focus! As you can see, the antlers are REALLY BIG! 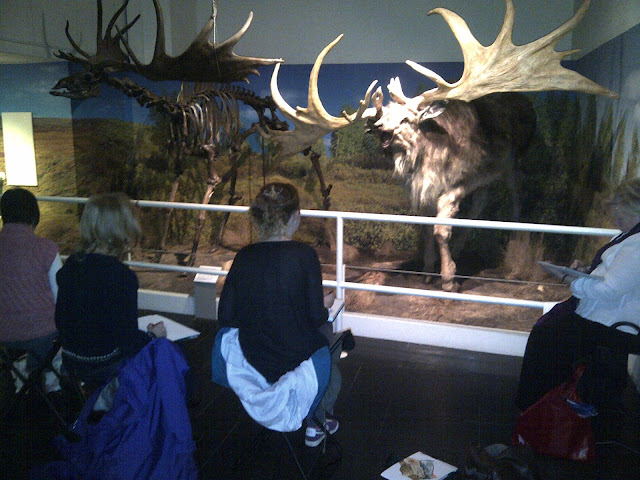 Quote of the day from Hilary... I'd given her some suggestions as to what to look for in her drawing, and shortly afterwards she gave a big sigh and started rubbing out. She looked at me and said, 'You're not always right, but you're never wrong'!  That'll do!

Next up - Portrait Workshop with lovely Mama Kaz modelling (who won't be quite as static as the deer) (and her antlers are much smaller as well).