So... working on the dining room table for a couple of weeks was ok, but I began to get on my own nerves.  Besides, my new toy had arrived... a slim line easel. Time for a spacial rethink.

Which was exciting until I realised there were no assembly instructions with it - puLEASE...!

I chose a slim easel because the lovely big ones were too tall for my ceilings. And as I don't work very large, slim is fine for now. My thoughts had turned to my tiny spare bedroom - or the Box Room, as we call it in Ireland. I don't know if that's because you're only supposed to keep boxes in it, or if it's because it's the size of a box. But certainly, it's economical in scale. I squeezed the easel in, after draping the walls with black cloth (this was such a palaver I'm trying to blank it from my memory), put the shadow box on a chair to a height that I liked,  played with the lighting, then began drawing, in my Moleskine sketchbook. (actually, no. After all that, I had anice cup of tea. Phew. THEN began drawing) After that I laid in the underpainting on the world's smoothest, custom made board from Milliken's.  (www.millikenbros.com) 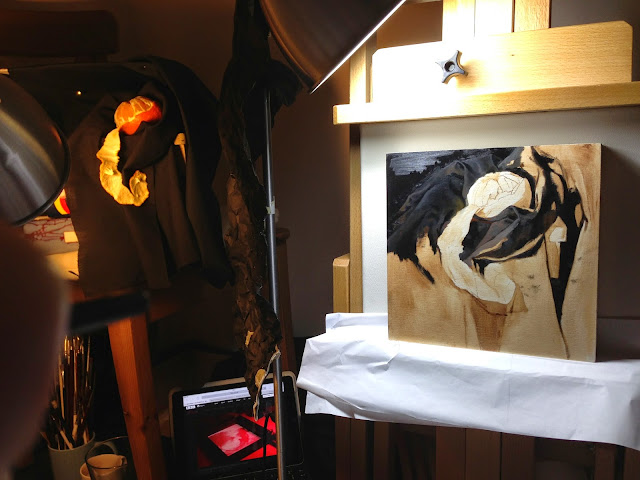 The thing I struggled most with was reflected light hitting my board, so I set up a piece of black foil - dangling from my lamp - to block it. You can see from the photo below that I have two lamps - one on the still life and another on my board. The rest of the room is pretty dark.The black strip in the middle of the photo is the light-blocking foil. 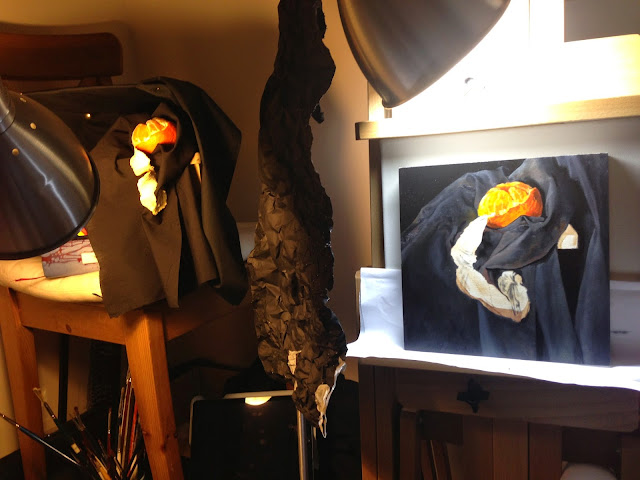 The camera is a wonderful tool, but there are (many) times when it doesn't serve, and trying to photograph paintings is one of them. Below is the finished painting, but the real thing has much colour in it's cloth and looks richer, more velvety. But, you get the gist.