Last night I was teaching a student a new way of drawing, which was the compltete opposite to the way he had drawn before. He has attended for a couple of months, doing mainly water colour, so he had previous experience of my classes. This new way of drawing and looking at things felt alien at first, but he persevered, while I made the exercises progressively harder and harder. He totally understood what he was doing and was fully absorbed in the process - it takes a lot of concentration and I sometimes joke about how tense and still everyone is while doing this. What amazed me though was what he said at the end of the session, when I asked what he thought of the new drawing process. After expressing his awe and delight with his progress, he told me something shocking. He said that he suffers from reumatism and can't normally sit for longer than half an hour without pain, so has to move around frequently. I was really surprised to hear this, for at my house, he sits for up to 3 hours at a time. He said when he is here, he is so focused on what he is doing, that he has no pain.

How amazing is that?

Then another student backed this up saying that during one of the sessions he'd had a migraine but that he decided to work through it. He became aware that while concentrating on the painting and its difficulties and challenges, his pain was clearly being masked, until he was driving home afterwards.

I have long been suggesting that doctors ought to prescribe drawing classes (by that, I mean challenging classes, the ones that feel hard, so you're really learning!) because of the mental break it gives from other things in busy, stressed lives. A couple of my GP students have agreed. But this is the first time I have been made aware that students have relief from pain while drawing - perhaps its that the pain is transferred to the difficulty of the task. Whatever the reason, it seems that creative focus is not only important for mental health, but physical health too.

Below is my third tree painting in oils - I relaized whn I posted number 4 that I hadn't put up number 3. 10in x 10in. 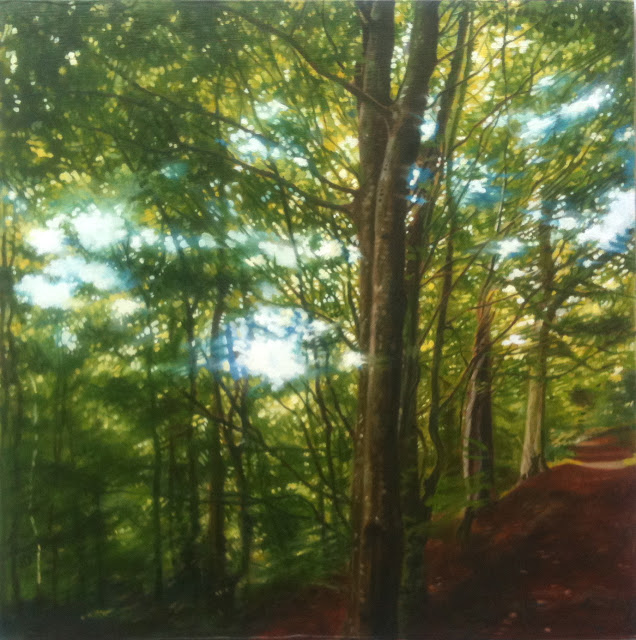 Email ThisBlogThis!Share to TwitterShare to FacebookShare to Pinterest
Labels: Drawing and painting workshops and Distance Learning